Edweard Muybridge was an innovative photographer born in 1830 and died in 1904. Muybridge began photographing the movement of animals an later began to photograph the movement of human beings. He is first most famous for his discovery that when a horse is in full stride, there is a point when all fours are in mid-air. 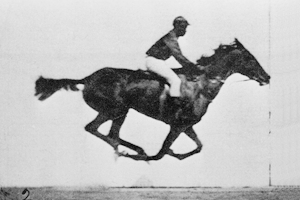 Muybridge spent much of his life producing thousands of images that capture progressive movements within fractions of a second http://americanhistory.si.edu/muybridge/. Though much of what Muybridge studied was science-based, the photographs he produced are beautiful and well-respected in the art culture as well. His interest in capturing motion helped to progress photography and cinematography. Though others have viewed him as more of a scientist than an artist, it is interesting that he himself identifies himself more closely as an artist.

When searching through his many photographs, the photographs of humans interested me the most because it captures movements that humans make that is never quite detected by the naked eye in the split second that the movement occurs.