To begin I'd like to just reiterate that Camera Obscura literally means "Dark Room" and is creating by making a dark room with one small light opening which allows the image to enter through. The image then appears on the opposite side of the hole in an inverted (upside down) display. The concept of the Camera Obscura was later expanded, as people began to include innovative ideas into the basic design. A lens can be used to magnify at the hole to magnify the intensity of the light rays passing through to strengthen the output image. A series of mirrors and lenses can be added to invert the image in any desired position. Eventually it was discovered that this design could be used using any closed room design. The most magnificent part about this invention is that it is relatively simple to create but has amazing results in terms of picture quality and clarity.
Within the video provided in the link below we are thought how to make a Camera Obscura using a pumpkin, but ultimately any closed shaped structure can be converted into a Camera Obscura using the provided techniques.
As of 2007 the worlds largest camera obscura is recorded to have been made out of an airplane hanger found in Germany.

Used as one of the initial forms of photography, the camera obscura was ultimately a precursor for the modern day camera. A camera obscura consists of a completely blacked-out room or box with a small hole made in the wall of one side. When light enters the hole, an inverted image is produced on the opposite wall of the room displaying the scene outside. Because light travels in a straight line, when light rays are reflected from a bright object and pass through a small hole they do not disperse, but instead cross and reconstruct as an upside down image on a flat surface parallel to the hole.
The first noted record of the camera obscura was credited to Aristotle who observed this principle during a partial eclipse of the sun around 330 B.C.
Later, the camera obscura began serving scientific purposes. In the 10th century, scholar Al Hassan used camera obscuras to demonstrate how light travels in straight lines, and in the 13th century astronomers used them to study the sun. Astronomer Johannes Kepler is credited for coining the name “camera obscura”, a Latin term, which literally translates as “darkened room”.
Over the years, early models of camera obscuras, which were as large as a room, have adapted into smaller and more portable versions, eventually becoming the model for modern cameras. Robert Boyle and Robert Hook were among the first recognized inventors to make the camera obscura portable. In the 16th Century, the convenience of portable camera obscuras established them as an important artist’s tool. Artists used them to create more accurate and detailed drawings that they could not produce without the image reproduction captured by camera obscuras. In the 19th century, camera obscuras were used for more recreational purposes. Portable versions were used to document travels, and much larger public camera obscuras became popular seaside attractions for sightseeing and observing.
Today the camera obscura is experiencing a revival of curiosity. Older camera obscuras are notable historically and culturally for their contributions to photography, and artists are experimenting with innovative types of camera obscuras around the world. As nothing more than a darkened box with a lens and a screen that captures an image, the present day camera owes its foundation to the camera obscura.

A Camera Obscura is created by creating a single hole in a dark enclosed space. Inside this created space, an image is created reflecting the natural scenery and space before the box, to a certain span of view, upside-down. Charles Schwartz built a camera obscura in collaboration with optics designer George Keene on the 17th floor of an apartment building in New York overlooking Central Park Reservoir. 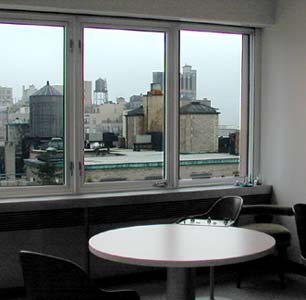 The controls that Charles is using on the side of the table control the shades, lights, focus, altitude, and azimuth.The view reflected on the table is is of a view down on Fifth Avenue. 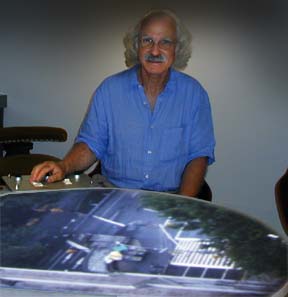 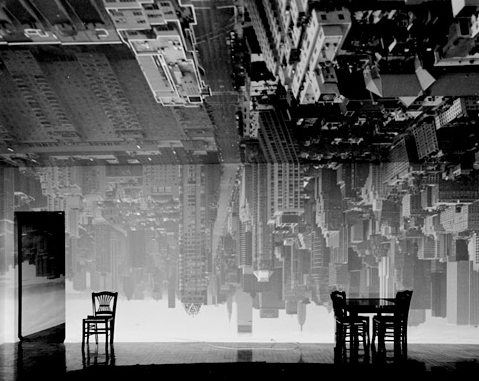 "“PhotoGraphy” is the creation of a process in which the environment, time and light react to each other and generate images on three-dimensional objects. This series is about coating objects with a “light-sensitive” layer, put in a black box with strategically placed pinholes, and exposed for 5 to 50 minutes depending on the brightness of the environment. It is a new way to capture a moment in time, no matter whether the image on the object is focused or losing focus – the object will carry the trace of its first moments of experience, its first exposure."
http://vimeo.com/27108555
Abelardo Morell uses a tent as a camera obscura to reflect the image of the Brooklyn Bridge onto a tar paper rooftop.

"Tent-Camera Image on Ground: Rooftop View of the Brooklyn Bridge," 2010

Camera obscura as we have visited through it’s history has been introduced to us in the early 1800’s by joseph Niepce. Where artist’s such as Niepce used the camera obscura for drawing purposes as well as just vieing purposes. It was later introduced to making photography which was presented as the first form of photography, by which light was allowed to in through a small area a draw out the image. Camera obscura has been introduced through the history of photography by which has allowed many modern artist to excel n different forms and mediums of photography whether it is digital or film ect. However there are artists who have yoused the original process or similar process of the camera obscura to develop their prints or process as their medium such as artist Abelardo Morell.
In 1991 Morell developed his first photograph using camera obscura in his darkened living room.However after making a successful production through his medium and sources he took it as a medium and expanded, taking this idea of camera obscura and using it around the world.
http://www.jacksonfineart.com/abelardo-morell-730.html
http://www.abelardomorell.net/photograp ... sc_01.html

The word camera obscura came from Latin, where camera means a vaulted chamber/room, and obscura means dark. Together it means an optical device that projects an image of its surroundings on screens. This is what it basically looks like below.

Camera Obscura is often used in drawing and entertainment, and was one of the inventions that led to photography. The device consists of a box or room with a hole in one side; light from external scene passes through the hole and strikes a surface inside where it is reproduced, upside-down, but with color with color and perspective preserved. The image could be projected onto paper and then traced to produce a highly accurate representation. Below are pictures of artists making art works based from the camera obscura.

By tracing the image projected from the camera obscura, artist could make a realistic art work like this: