Concept Description
I wanted to see if new movie releases in the Pirates of the Caribbean series would spark interest in rewatching or watching for the first time the previous movies in the series. So, I got from the SPL library data the number of checkouts per month for the first 4 Pirates of the Caribbean movies. To visualize the dataset, I decided to make a symmetric line graph, meaning I would reflect the graph about the time axis. Also I have encoded the absolute value of the change in checkouts in the colormap with respect to the maximum of each movie's maximum change in checkouts, with white being the highest and black being 0.

To do some further data processing, I wrote this small python script that gives me the absolute value of the time derivatives for each of the movie columns.

I initally wanted to represent the checkout number by a width of a "river". But I figured that for functionality reasons, it would be better to use a line graph.

Then, to keep the "river" idea, I decided to reflect the linegraph about the x-axis. Here is a picture of that, now with all the movies.

And here is the final results

The vertical lines that indicate movie release are releases for the library, meaning the montht that the movie was made available in the library. I chose this date because I wanted to measure the influence a new movie has after it has been watched by someone who borrowed the dvd from the library, rather than watching at the movie theater.

There seems to be a "lag" between when the movie is released and when the maximum checkout for that movie occurs. This is probably because people who want the DVD version of the movie are "casuals", who would not know(or care) when the movie will first be made available in the library. One supporting evidence for this claim is that the first local maximum is usually not the global maximum. In any case, the graph does not seem to indicate an increased interest in the previous movies as each new movie is released.

Note that the code(not yet there) is written in such a way that minimal modification is needed to visualize another dataset. Eventually, all that will be required is that modification of file names in the pirates.py file and the title names in the SQL query.

I changed my data inquiry within my mySQL to reflect a more intriguing data set. My original query, I felt would not yield an interesting 2D visual. So I changed my search to reflect the popularity of Seattle grunge music in 2006.

Concept Description
I am developing spatializations that support spatial search across the Seattle Public Library. Library repositories offer unique insights into the travel patterns, destinations and location-specific material popular within the general public in Seattle. 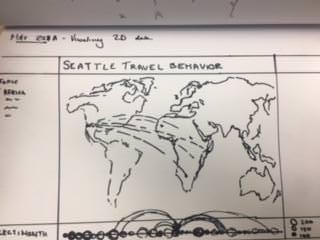 The visualisation strategy is inspired by travel, the idea of representing a flow of information from locations around the world to Seattle public library is used as a metaphor.

To obtain travel-based items in the Seattle Public library database, items with a Dewey Class ranging from 910 to 919 are particularly focussed on travel. To query the data I use the following script:

The duration of the query is around 31 seconds.

For its functional purpose, I want to show the topic relationships between library items, which is exhibited by the colour of each link. The name of the library item appears underneath the category of the Dewey Class. The arcs form links between a single library item and the other items in the selection that share the same Dewey Class (Reference: Rodger Luo). 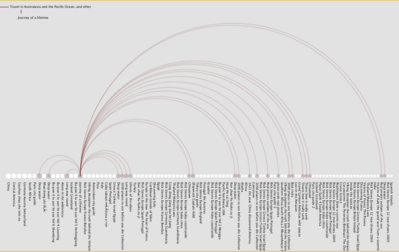 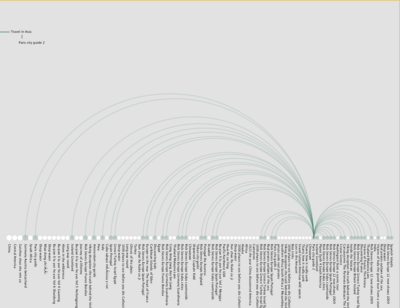 From the visualisation I notice that there are some items in SPL that are incorrectly located in certain Dewey Classes.

Further tasks
To continue with my metaphor, I want to add a feature to my visualisation that locates all of the items associated with travel in the Seattle Public Library to a particular geographic location in the world. When the item is selected, either from the topic link visualisation of the mapped visualisation. Items with the same Dewey Class will share a link with each other or with the Seattle public library.

From this, I aim to combine the topic link visualisation into a geographic perspective. To do this, when each library item is selected, others from that continent will be highlighted in their relative geographic positions.

To do this, each library item selected needed to be geocoded by the following query in R;

Although this remains a work in progress, I aim to produce a visualisation which allows user to navigate through search spaces in a topical way (exploring similar topic relations) and geographical relationships (exploring the relationship to the Seattle Public Library, or to the other items occupying its Dewey Class.

[The extension 7z has been deactivated and can no longer be displayed.]

In this assignment, I chose Harry Potter series to show the relationship of checkout times between different years and different books. Since Harry Potter series has seven books, I chose the seven classic colors in the rainbow. For the 2D design, I want to show the whole information at first peek, so I made a seven by seven matrix. I had two factors to reflect the numbers of checkout times which were transparency of colors and the size of the matrix cell. To have more interactive functionalities and specific numbers for each year in the plot, I added a function that if user click on a specific year, the plot will be redrawn into histogram.

--
Sketches and work-in-progress screenshots of your project with descriptions

It was interesting to find that seven books share with the same trend in 12 years. That is to say, the number of checkout for every installment has the same fluctuation pattern. In addition, I manually sorted every installment by published time. The bottom one, Sorcerers stones, was the first book and the top one, Deathly hallows, was the last book. The plot showed that there was no big difference in number of checkout for books published before 2005. Furthermore, seven books had similar numbers after 2012. One thing should be mentioned was that the number for the first book remained high compared to other books.

--
Please zip your processing code to include data folder for "ready to run". Add the zip file as an attachment.

DESCRIPTION
This homework is a processing program that visualizes the numbers of cores written by Brian Tyler from 1997 to 2017. During this period, Brain wrote scores for 71 films, 8 TV films. 22 TV series, and 6 video games.

SKETCH & IDEA
I was trying to incorporate the shape of the solar system into this visualization project. In the beginning, I set each year as an individual sun, which is surrounded by planets. The number of planets is the number of scores that Brain Tyler wrote in the corresponding year.

*New idea: When the project was initially implemented, I noticed that the spinning planets were not suitable to reveal data because the periodic circular motions may cause dizziness, which will impose uncomfortableness on the audience(Shown as the following).

To reduce this effect, I changed the solar system layout so that each planet no longer going around the center, but is ejecting from the center, simulating the effect of electronic transition. The center is no longer static but blinking, and the frequency is inverse proportional to the degree of activity.

QUERY
My code only outputs the itemType, itemNumber, and the number of times that item has been checked out.

FINAL RESULTS & ANALYSIS
Based on the final version of this homework, we can clearly see that Brain Tyler mainly wrote scores for films and TV films in the early stage of his career. Brian was most active during the year of 2003 and year of 2009 to 2014. It also can be seen that Brain started writing scores for video games in 2010, and remain productive for 2 years. All these trends matched the trends I obtained in the HW1’s chart, which is shown again as the below:

Updates:
- Dynamic gray background. The background now is related to the distance between the camera and the object that camera is looking at. The further the camera is, the darker the background will be.
- Lato font. All fonts used in this project are now updated to Lato-Light. Multiple fonts choices are available in the data folder.
- Point shader. All points representing Brain Tyler's works are now rendered with a customized point shader. The new shader produces a halo effect on each visible point.
- Interaction. Users can switch viewing year forward/backward by pressing "A" / "D" key.
- Real-time performance improvement. Efficient data structures were used to speed up the program. Some redundant computation blocks were simplified to achieve less program latency.


Compatibility:
The code now can run on Windows / Linux system. Compatibility issue was found on Mac system. A Mac-compatible version will be updated soon.