Report for this topic is due by April 15, 2021 but each of your submissions can be updated throughout the length of the course.
George Legrady
legrady@mat.ucsb.edu
Top

What stood out to me was how people approached this new technology, photography, in various ways as a medium for art. Due to my personal interest in Bauhaus, I particularly focused on Moholy-Nagy’s work. His portrait, taken by Lucia Moholy, breaks the traditional rules of photography by contrasting the focused face with blurred right hand.

His right hand appears in his other work photogram (1926), which directly captures hand and brush.

Unlike his other photograms (below) that transform everyday objects into mysterious forms, the photogram above allegorizes a new way of thinking.

Moholy was appointed to the Bauhaus in part because he was willing to embrace new materials and technology. He argued that the artist has the power to unlock vision wholly unprecedented in human history through technology (e.g. camera). He also believed that the artist had the responsibility to serve as the pioneer in new fields working with the technologies.

Although I am an engineer, I feel overwhelmed by the speed of technological development and many times worried about fast changing society. I think emergence of photography also might have been a threat to many painters at the time. It is often surprising for me to see how other artists like Moholy had actively explored new technologies and see them as opportunities. We are living in the special era where artificial intelligence has gotten into creative domain. Moholy mentioned in his book 'The New Vision' that technical progress is a factor of life which develops organically. He believed rather than working against technical advance, the solution lies in exploiting it for the benefit of all.


Man cannot perceive a great deal in life. Sometimes it is because his organs do not respond quickly enough, because, for example, a moment of danger demands too much of him. Almost everyone shuts their eyes faced with the enormous descent of a roller coaster. But not the film camera."

From his remark, we can infer where he thought the power of the camera lies. It also correlates with his endeavor toward designs that convey values of precision and exactitude, eliminating the arbitrary, subjective impulse of the individual artist. Objectivity, but also producing unknown relations was the purpose of his creative activities employing new instruments.

I appreciated tracing the origin point of the history of the computational image back to the Paleo-camera theory. I can imagine how this phantasmic apparition would have conjured divinity, mysticism, and an expanded consciousness in the early humans who witnessed this accidental camera obscura before they had the knowledge to describe, replicate, or systematize the observed phenomena. This sudden apparition would form a rupture in the fabric of reality, opening up new possibilities for viewing, perceiving, and understanding the world. These momentary ruptures in the perceived boundaries of reality continue today, though more frequently and cumulatively, with each major paradigm shift in artificial intelligence, machine learning, virtual and mixed reality, projection mapping, simulation, robotics, and space exploration, just to name a few.

The spectre of the Paleo-camera theory, along with the mention of the Shroud of Turin in Week 2, made me think back to two excellent essays covered in Professor Jenni Sorkin’s Art History seminar on Alchemy, Magic, and Spirituality in Contemporary Art. Tom Gunning’s “To Scan a Ghost: The Ontology of Mediated Vision” and Georges Didi-Huberman’s “The Index of the Absent Wound (Monograph on a Stain)” both examine notions of truth and fiction, miracle and artifice, through optical and tactile mediations. These texts, while rooted in the history of photography, cinema, and anthropology, particularly interest me in their application to contemporary modes of photogrammetry, UV mapping, holograms, AI, deep fakes, and digital forensics.

In “To Scan a Ghost: The Ontology of Mediated Vision”, Gunning examines the history and affect of Spirit Photography through a range of optical phenomena, philosophy, illusions, sleight of hand, poetry, and photographic and cinematic processes. Gunning is less interested in the objective truth of a recorded image, and more concerned with the medium’s potential for new ways of seeing (and new channels of communication between spirit realms) to emerge through optical devices and technology. Gunning states, “the virtual image becomes the modern phantom” (Gunning 2007 p.111), and he quotes the literary scholar Terry Castle as saying photography was “the ultimate ghost-producing technology of the nineteenth century” (Castle 1995, p.167). He goes on to quote Castle, who stated that modern culture:

“felt impelled to find mechanical techniques for remaking the world itself in spectral form. Photography was the first great breakthrough—a way of possessing material objects in a strangely decorporealized yet also super naturally vivid form. But still more bizarre forms of spectral representation have appeared in the twentieth century—the moving pictures of cinematography and television, and recently, the eerie, three dimensional phantasmata of holography and virtual reality.” (Castle 1995, pp.137-138)

The uncanny and phantasmagoric aspects of Spirit Photography that Gunning and Castle discuss can be extended to new forms of virtual reality, artificial intelligence, deep fakes, and photogrammetry. The title itself, “To Scan a Ghost”, evokes the 3D scanning process of photogrammetry, and the odd blobs, deformations, and artifacts accidently generated by photogrammetry software resemble the ectoplasm, orbs, and spectres that “appear” in Spirit Photography. Gunning’s text from 2007 and Castle’s text from 1995 discuss the ghostly forms present in new media (though Gunning was frustrated by the term) and virtual reality, and I’m very curious how they would update their analyses today after the rapid technological accelerations of the subsequent years.

Didi-Huberman’s “The Index of the Absent Wound (Monograph on a Stain)” examines the Shroud of Turin and the lengths that scholars, historians, scientists, and surgeons have gone to in an attempt to prove or disprove the authenticity of the shroud. Like Gunning, Didi-Huberman is less concerned with the fact or forgery, and more in the imagination, devotion, and fantasy the shroud produces. What I found most interesting in the text was the translation from the plotted stains on the 2D plane of the shroud to a 3D reconstruction of a body, and it’s orientation, from that tactile data. The shroud itself resembles a UV map in 3D modeling, or the 2D skin of an unwrapped 3D mesh. The essay includes rudimentary axonometric projections of the crucifixion based on the geometry of the stains drawn by Giulio Ricci in 1972. The renderings are almost laughably crude by today’s standards, but the idea of translating 2D data and geometry into 3D forms remains interesting. It is also interesting to think of in relation to the first chemically fixed image by Nicéphore Niépce in 1826. Niépce’s heliograph is almost abstract in it’s grainy pointillism—itself a collection of geometric stains formed by photons meeting a chemical substrate. While the Shroud of Turin is not a traditional photograph, it is a collection of geometric stains on the substrate of linen—a point cloud with data and memory.

Throughout our accelerated history of the photographic image, I was fascinated by the back and forth process of progression between chance and calculation; between apparitions, happy accidents, and artistic experimentation, and in parallel rigorous scientific experiments, highly engineered optical devices, and advances in chemistry and the computational image. The first humans to be captured on film by Louis Daguerre in 1839 occurred almost by happenstance as the subject pauses to get his shoes shined, standing still just long enough to be captured by the long exposure. Jacques-Henri Lartique perhaps inadvertently advances the photographic capture of motion in Le Grand Prix A.C.F. (1913) as he barely captures a speeding car in frame, mixing blur and focus. Stanford and Muybridge seem to bridge these two realms in their capture of animal locomotion. Leland Stanford had the hypothesis that horses took all four feet off the ground mid gate, and he functions as both provocateur and patron to support Eadweard Muybridge’s meticulous five year experiment to prove Stanford’s theory. While rigorous and scientific, this breakthrough also inadvertently builds the foundation for the advances in moving images and cinema that will follow. Étienne-Jules Marey and Harold Edgerton would also fall into this rigorously scientific study of photography, which resulted in absolutely gorgeous images that expanded our understanding of reality. In relation to this dynamic between aesthetics and science, R. Buckminster Fuller once said:

“When I am working on a problem I never think about beauty. I only think about how to solve the problem. But when I have finished, if the solution is not beautiful, I know it is wrong.”

I was particularly interested in learning more about Julia Margaret Cameron after the lectures as a portrait artist with an interest in narrative artworks myself! There wasn't a lot of information about her that I could easily find, but I did find this really great article that went in-depth into her process: https://www.vam.ac.uk/articles/julia-ma ... ng-methods. She did a lot of experimental work that played with the medium itself, such as scratching into and layering fern leaves on the negatives to manipulate the photographs and utilizing imperfections like excess chemicals, fingerprints, and blurriness to create interesting visual effects. Personally, I really love her photographic illustrations of poems. I feel like it's rare to see illustrations of written works as photographs rather than drawings, and I think they have a really ethereal and beautiful quality. 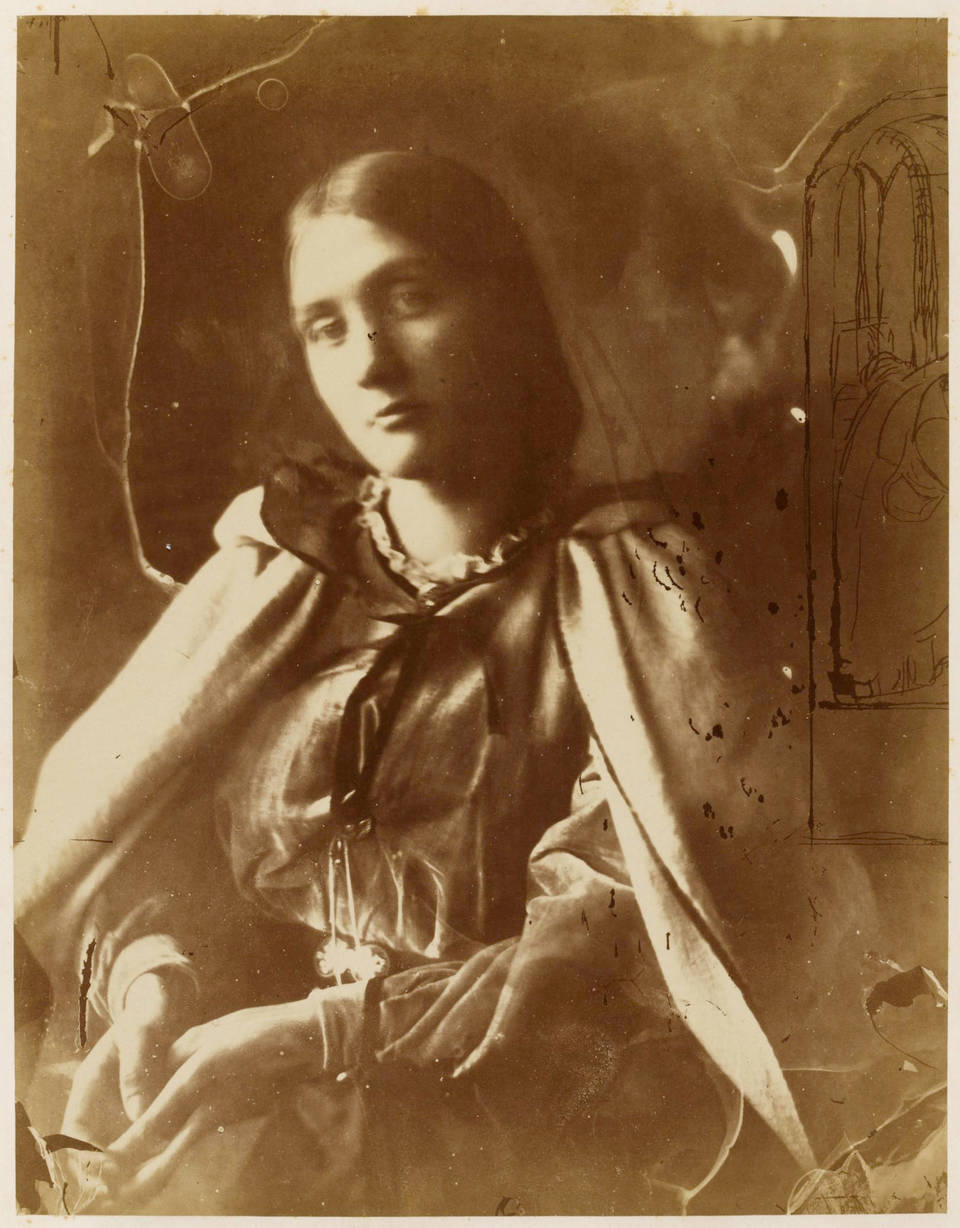 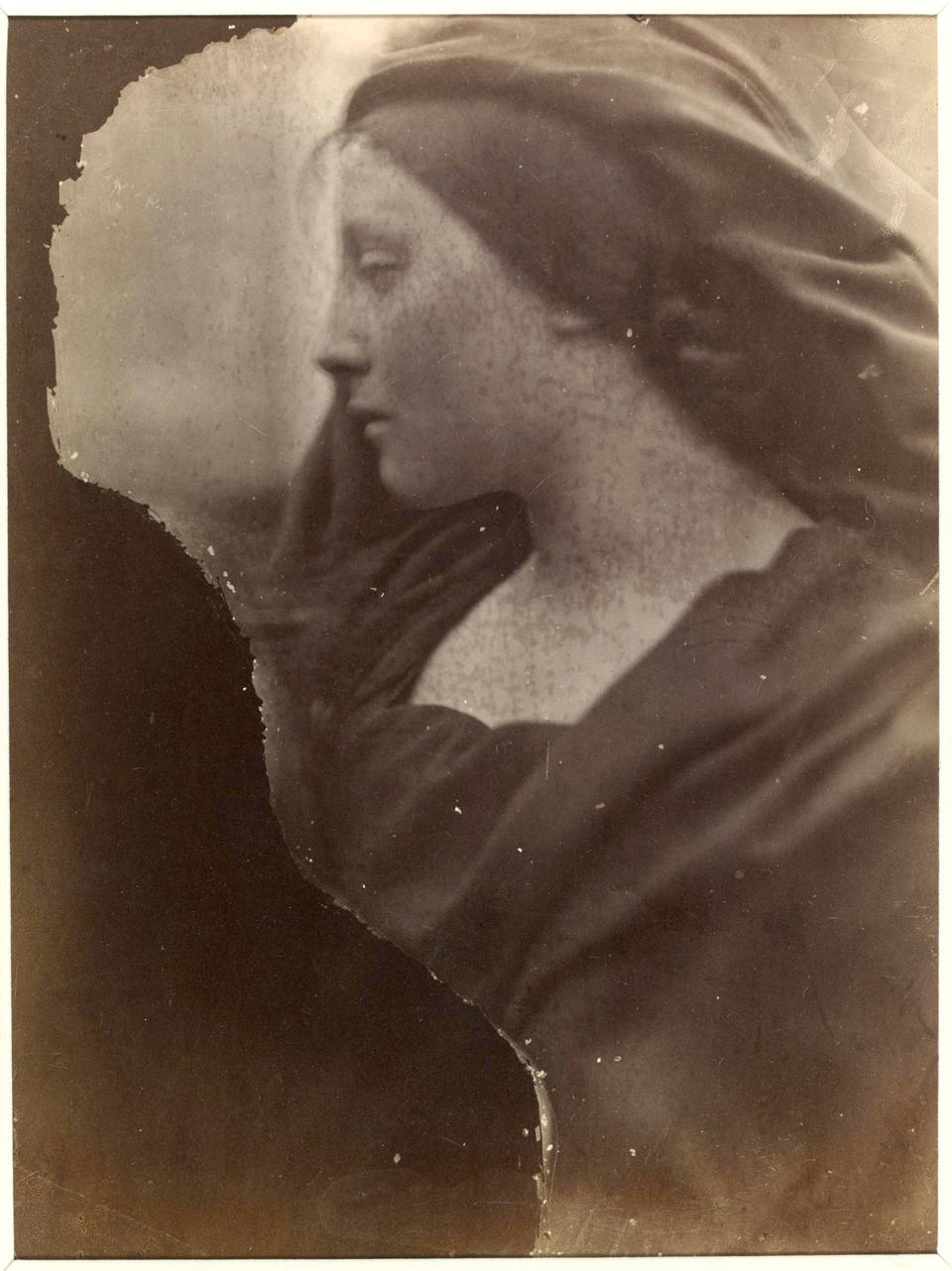 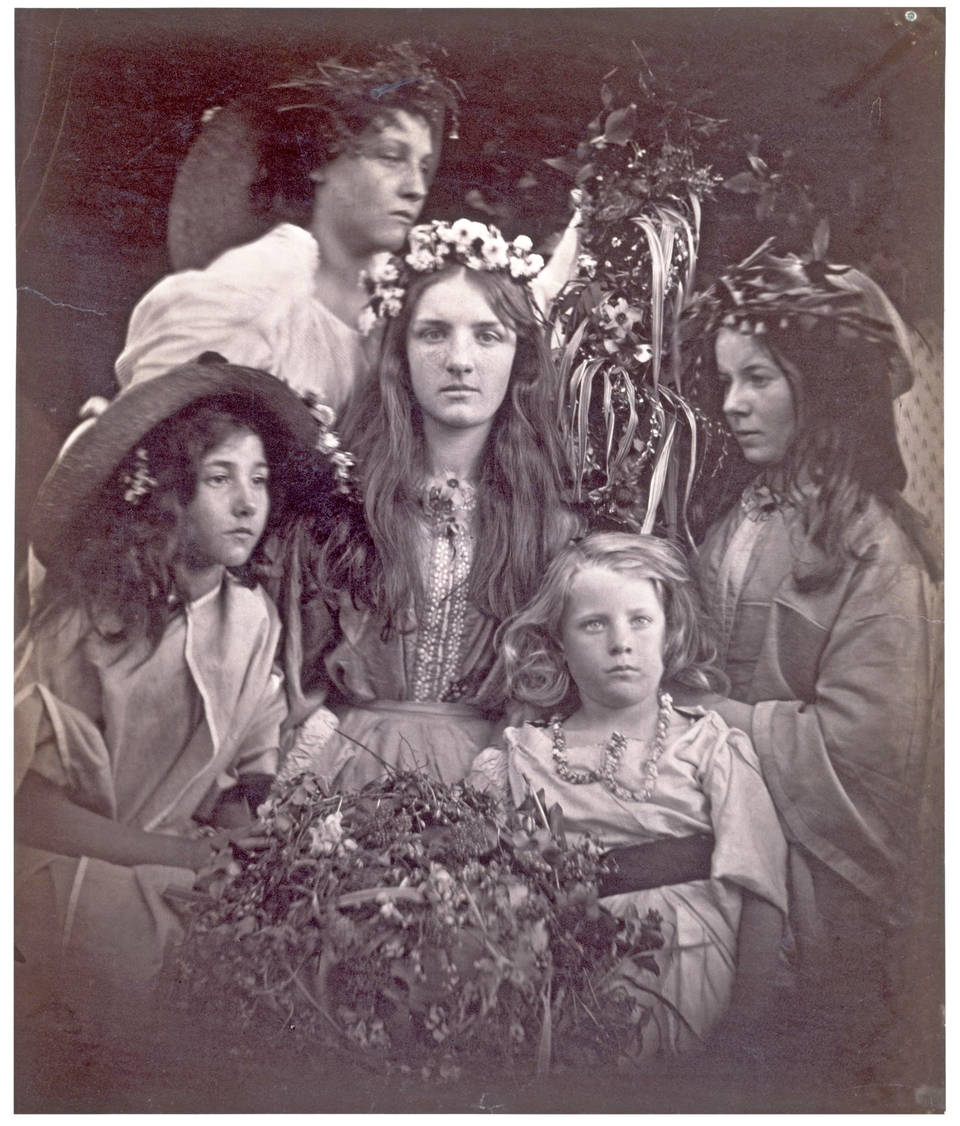 Looking into these vintage photographs as well as reading Kevin's really excellent delve into spirit photography reminded me of the Cottingley Fairy photographs. They were a series of photographs taken in the early 1900's by two young girls that showed the girls sitting with "fairies." The photos were circulated and reached Arthur Conan Doyle, who was a profound believer in spiritualism, and he published the photographs and vouched for their authenticity. The photos were examined by experts that determined that they were not tampered with/manipulated, so it was difficult to assert that they were fake. In the 80's, the girls who actually took the photos came out and admitted that they were fake, and the fairies were just drawings that they cut out and stuck to hair pins. Here is an article that goes a little more in depth into the whole thing: https://www.historic-uk.com/CultureUK/The-Fai ... ottingley/ and another one with a couple more of the pictures: https://www.bbc.com/news/uk-england-leeds-55187973 and the article that Arthur Conan Doyle wrote: https://www.arthur-conan-doyle.com/inde ... otographed Looking at the photos now with modern eyes, I think it's fairly easy to tell that they are drawings/two dimensional, but I think the whole thing brings up an interesting point about how our perception of realism has changed over time. Video games in the 90's/00's that were praised for their realistic graphics look pretty terrible to us now, and even some of the most impressive CG made with modern technology can be picked apart and just doesn't feel right for some reason. Even though they were a hoax, I think they're still pretty interesting photographs in their own right!
Top
Post Reply
4 posts • Page 1 of 1