From what I read in Stephen Mamber’s article, it is clear that Marey was curious about the way the world works and he used time as his medium of exploration. By capturing moments in time, he could speed them up, slow them down, pull them apart and study how they connect with one another. For instance, when referencing Marey’s zootrope of a bird in flight, Mamber notes that “ the zootrope-with-sculpture is one kind of apt metaphor because Marey would want the viewer to look as much from above as through the slots. The overhead view offered the breakdown into successive moments of movement- the analysis, as it were.”

This interest in analysis brought to mind another artist, Harold Olejarz. Olejarz produced a series of digital scans of his own body parts. In his artist statement, Olejarz explains that “when a camera takes a picture, it captures an image in an instant. When a scanner takes a picture, it captures an image one line at a time. My art exploits the process by which a scanner "takes a picture" to create digital images that do not use software to create distortions or manipulate an image.” In this sense, Olejarz also uses time as his medium of exploration.

Marey used time to help illustrate the way things are. By reconstructing body parts with the help of technology, Olejarze brings to our attention the way things are not. It is an exploration of what should not be- an essential aspect to fully knowing what something is. Reconstruction and deformation is Olejarz’s own way of pulling something apart to analyze its pieces. Similarly, Marey explored movement by freezing it and speeding it up, breaking away from real time. Like photographs, scans and photo copies are supposed to document reality. They are used as a way to gather information and form conclusions. Olejarz’s images are far from realistic- if I saw a man walking down the street with eyes wrapping around his nose and ribbons for fingers, it would strike me as unusual. However, who is to say that these are not real depictions of a real face in real time? This breaches into a whole discussion on reality that I cannot begin to cover.

On of the primary arguments in Mambers article is that the work of Marey should not be viewed as a stepping stone to something greater, but as an artistic and scientific happening in its own right. Artists such as Duchamp did not look at Mareys work and seek to improve it, instead it was their muse from which they drew from. Also it is important to note that Marey should not only be credited for inspiring Duchamp's Nude descending the staircase, 1913, but as Margot Lovejoy suggests in her book, Digital currents: Art in the Electronic age, Marey should be linked to launching the entire movement of Cubism by inspiring such artist's as Picasso and Braque. http://books.google.com/books?id=BrwN4T ... al&f=false (pg37)

In the same way the Art World admires and learns from the work of Marey, the technological world has too. The application of Marey's inquiries far extends beyond modern day cinema, but enters into the technological advances of motion capture devices used in Video and computer games. These motion capture devices borrow from marey the system of mapping limbs and joints to capture the body moving in time and space. http://books.google.com/books?id=6nPfuy ... &q&f=false(pg13)
Here is a link to a video which shows how Marey's joint and limb markings can directly be translated into a simplistic, animated digital character http://graphics.berkeley.edu/papers/Obr ... beExer.mpg

To further highlight the impact of Marey's significance, one must note the breadth to which motion tracking devices are being used. Not only for entertainment purposes, Motion tracking devices are being used in the medical field, but sports doctors and researchers, in the military, and in the development of robotics. The future also will draw from Marey, as virtual reality also draws on motion capture devices. Marey's work should be seen less like the 1st stage of development and more like the big bang that started it all.

For more on Motion Capture devices...http://en.wikipedia.org/wiki/Motion_capture 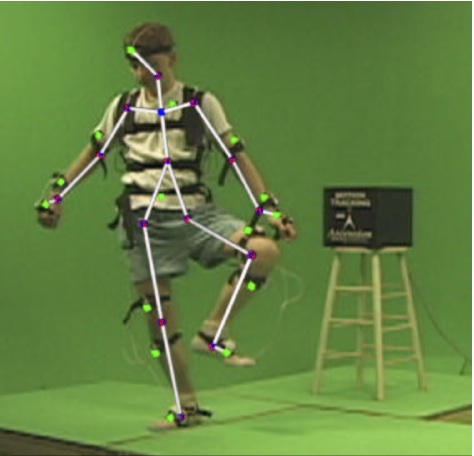 Etienne-Jules Marey was known for his interests in movement and his chronophotographic gun, which would capture complex movements. He was a French scientist and artist in the late 19th century. His work about movement became alternative system, which is something like cinema. He also used movement as a measurement and representation to change the way people think and analyze things and time. The process of how he captured moment allowed people to think and see things differently and came up with new technologies that involved different ways of using moment.

This kind of interest did not only happened in Western countries, but also Eastern countries, such as China. In Chinese culture, there is a kind of light that turns using heat.

The article we are assigned to read for this week, “Marey, the analytic and the digital” shows works of Etienne-Jules Marey, who invented the chronophotografic gun, which was the predecessor of cinema. The idea of chronophotografic gun was basically the capturing of a series of pictures that put together like a comic book that produce movement. If we look through the series of the images fast enough, the images work together like a short film, and this is how the film was originally created.

In the article, Marey was mostly concerned with motion in space, and he wanted to capture it. His process of observation was based on succession and synchronism. Marey developed the chronograph of running hourses lifting their feet to show the motion when horses running. With this series of images, we could see the coming of film making.

From my previous art classes, I learned about Marcel Duchamp. I found out that come of Duchamp’s works are deeply influenced by Marey. In the picture below, you can see that Duchamp’s painting, just like Marey’s photography, also shows the movement during a motion act. I found this was really interesting.

In the reading this week we were able to see the works of artist Etienee- Jules Marey who invented chronophotograpahy which was th predecessor of what revolutionized into cinema. His invention changed the idea of the way photography had been first interpreted as he was able to not only visually capture things at a certain place in time but also capture the movement of a human or object in motion. Through the speed of the fast moving photographs the viewer was able to visually interpret the photographs through the illusion and see the sequence of the subject moving. What originally began as a simple comic later revolutionized how artist were able to translate photography into cinematic movies. The rapid sequence of photographs with different movements of various subjects at different frame spends created the illusion. This simple technique has allowed many artists too this day to study the movement of bodies and allowed them to furthermore use Marey's technique and create animated films.